WHATS on
Home | Whats On | From the Stage to the Street 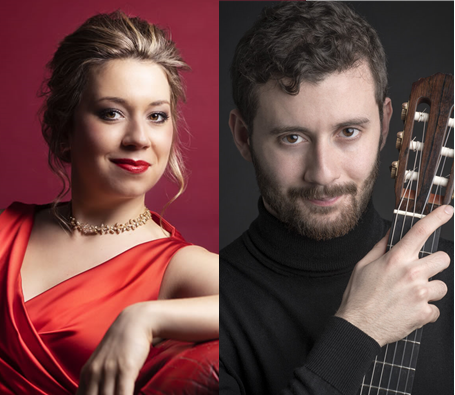 £15 (£10 for members of the Grinling Gibbons Society/The Friends of the City Churches). Payment by cash only on the door. Reservations essential; please email christina@hemsley.com

From the Stage to the Street

This versatile duo scale the heights  and the depths – from the refined artifice of opera seria to the simplicity of folk melodies.

The concert focuses on well-loved arias by GF Handel, with whom Gibbons shared a patron, arranged for voice and guitar.

In a nod to London street-life of the seventeenth century, the duo will perform folk songs in versions by Britten (the twentieth-century Purcell) Ravel and De Falla.

Olivia Boen: Praised for her “full-bodied, sparkling tone” (Cleveland Classical), Chicago-born lyric soprano Olivia Boen is increasingly in demand both on the operatic stage and in the recital hall. In the 2022-23 season, she will make her role debuts as Musetta and Gretel at the Hamburg Staatsoper, where she will be joining the International Opera Studio. This season, Olivia makes her debut with the Royal Philharmonic Orchestra under the baton of Sir Andrew Davis in Beethoven’s concert aria “Ah, Perfido!” and performed her first Vier Letzte Lieder in the Barbican with Dominic Wheeler conducting the London Schools Symphony Orchestra.

Earlier in the season, she opened Robin Trischtler and Roger Vignoles’ recitals in the 2021 Oxford Lieder Festival as an emerging artist with pianist Dylan Perez and is looking forward to returning to the Festival for four recitals with founder Sholto Kynoch in May. She was a finalist in the 2021 Guildhall Gold Medal Prize hosted by the Barbican where she sang a diverse programme of songs by Messiaen, Marx, Maconchy, and Rachmaninov, and arias from Leoncavallo’s Pagliacci, Strauss’ Daphne, and Floyd’s Susannah. Olivia is a current member of the Wigmore Hall French Song Exchange led by Dame Felicity Lott and François le Roux, a City Music Foundation Artist, and a Samling
Artist.

Giacomo Susani is an Italian guitarist and composer, born in Padova in 1995 into a musical family.  Since 2014, he has been based in London and performs most regularly within the city.

Giacomo is in high demand as a soloist and a chamber musician, having played in prestigious venues in England, including The Athenaeum Club, St. Martin-in-the-Fields, King’s Place and St James’s Piccadilly, and across Europe, with performances in Italy, Spain, Austria, Germany, Finland, Estonia, Switzerland, The Netherlands, Croatia, Bosnia Herzegovina and Poland. He gave the premiere of Polish composer Marek Pasieczny’s  composition for solo guitar Tate Sonata in March 2018, dedicated to Giacomo.

He graduated from the He graduated from the Conservatorio Arrigo Pedrollo, Vicenza in 2013 having been awarded “Diploma V. O. con lode e menzione d’onore”. He then studied at Royal Academy of Music between 2014-2019 where he was awarded Master of Arts with Distinction DipRAM “for an outstanding Final Recital” followed by the Advanced Diploma in Guitar Performance, winning the Bache Fund Prize, followed by the Gershon Ellenbogen/Maccabaen Award and the August Mann Prize. He studied guitar with Stefano Grondona in Italy and with Michael Lewin in England.