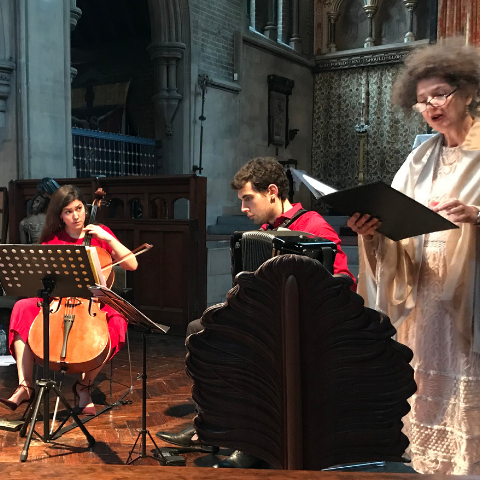 £15 (£10 for members of the Grinling Gibbons Society/The Friends of the City Churches) Payment by cash only on the door. Reservations essential; please email christina@hemsley.com.

A programme of words and music that Gibbons may have heard and their musical settings across 350 years presented by ArchiCantiores’ wordsmiths and musicians:
Marion Wyllie mezzo, Rogers Covey-Crump tenor, Jonathan Louth baritone, Charles Gibbs bass.

Readings and poems inspired by carvings, including  “Linden Antiphon” and other commissioned poems by Paul Munden & Oliver Comins, alongside the works of James Shirley, Robert Johnson, John Evelyn, John Donne, Samuel Pepys among others.

Biographies:
• Marion Wyllie, Convenor for ArchiCantiores, is a singer & music educationalist in London
• Rogers Covey-Crump is a celebrated tenor, internationally recorded & known with The Hilliard Ensemble
• Jonathan Louth, Founder of ArchiCantiores, is an architect and cathedral choirman
• Charles Gibbs, a member of The BBC Singers, and also sings with I Fagiolini
• Paul Munden, an adjunct professor at University of Canberra, is a published poet living in Yorkshire
• Oliver Comins is a published poet living and writing in London

ArchiCantiores is a troupe of singers, musicians and wordsmiths who perform words and music live to explore and support architectural heritage.

ArchiCantiores’ is led by Jonathan Louth, Advisor to the Legacy Project of the Grinling Gibbons Tercentenary

This concert will last approximately one hour without an interval.