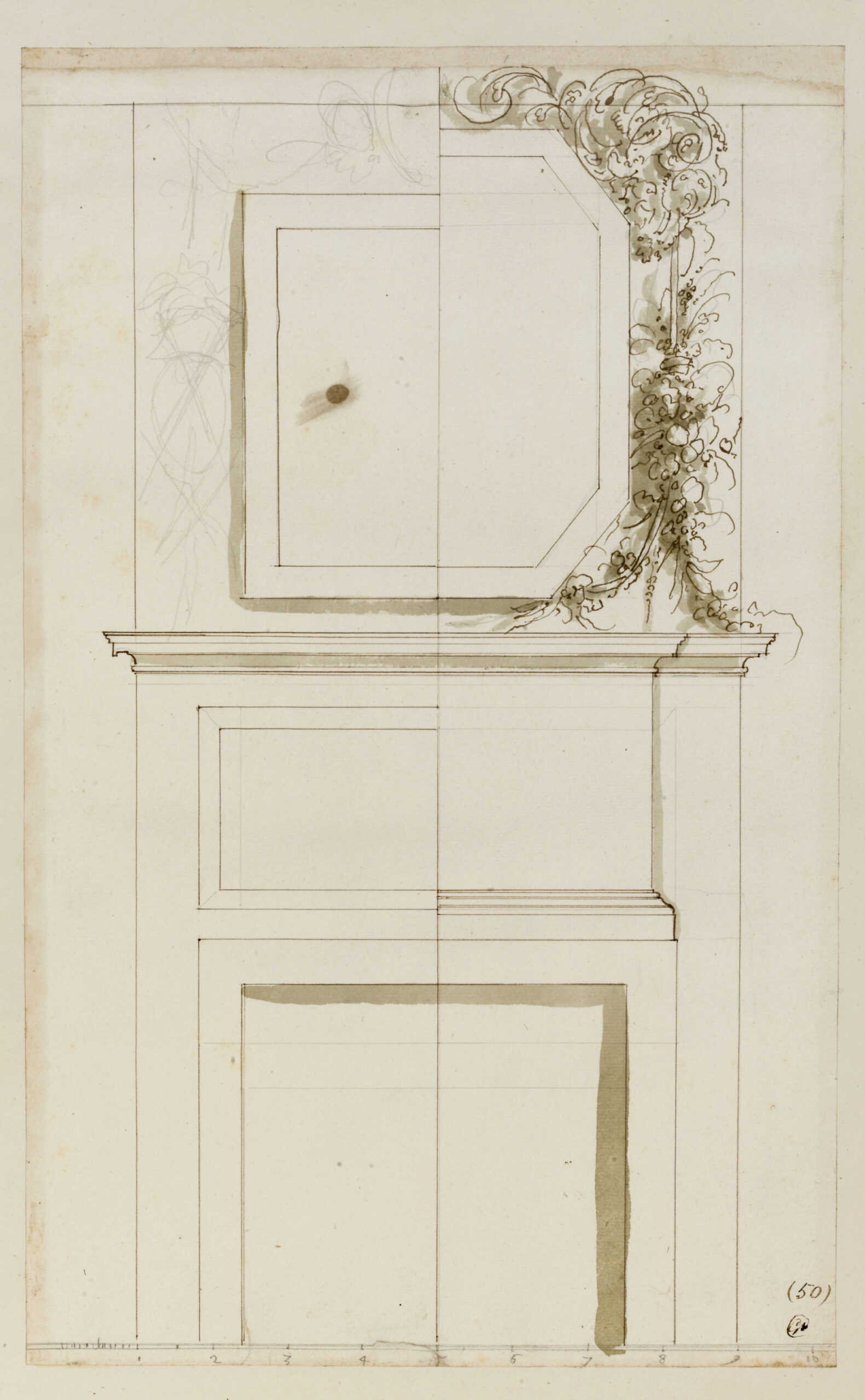 This chimney-piece drawing presents one of the two types Gibbons employed in these sketch designs, in this case the version with a mid-height mantelshelf and a rectangular panel above the fire surround. As with the others in this group, Gibbons presents two clear alternatives for the two zones above the fire surround. The left side presents the fire surround as a single plane, on which is set a simple rectangular framed panel aligned with the architrave of the hearth opening; above is a square picture frame with a sketch in graphite for an armorial composition hanging from a ribbon, comprising crossed arms, a shield and a helmet. At the top, Gibbons intended a cartouche, flanked by winged putti heads. The right side has the fire surround and mantel cornice stepping forward as a shallow pedestal above the hearth opening; above is a chamfer-cornered picture frame bordered by an acanthus whorl, from which hangs a drop fruit and leaf ornament, very loosely drawn. The scale bar beneath the baseline of the design was probably added retrospectively to size up the design for a particular wall elevation, perhaps in 1699 when works on refitting the interiors of the state apartments recommenced. It is not consistent with Gibbons’s scale bar on his wall elevation for Queen’s Mary’s Closet, 110/66 [“Design for the Interior of Queen Mary’s Closet with Putti” on this website]. This has a single graphite line with pen strokes for the feet divisions and a ‘3’ with a curved rather than a straight stroke at the top. The fire surround opening scales at just over 5 feet (111.5 mm), and the overall height from the floor to the underside of the cornice or entablature (marked by a horizontal pen near the top of the sheet) is 16 feet 5 inches (360 mm). This is about 4 feet less than the comparable height in one of the state rooms of the king’s apartments (about 20 feet 7 inches), but 2 feet 4½ inches more than the height in Gibbons’s elevation of the chimney-piece wall of Queen Mary’s Closet (110/66; 14 feet ½ inch [Design for the Interior of Queen Mary’s Closet with Putti on this website]). The intended room for the chimney-piece would have been at first-floor level, but would probably not have been one of the principal state rooms.

The position of the scale bar in relation to the bottom and side edges of the sheet aids our understanding of how the drawings in the Hampton Court volume were subsequently trimmed, mounted, trimmed again and remounted over a period of several decades or more, up to the repair and rebinding of the volume in 1850. The scale is close to the bottom of the sheet, and this has caused the draughtsman to squeeze up his numbers to fit (e.g. the ‘3’ and ‘9’). This suggests that the bottom of the sheet at present is the same as when Gibbons drew the design. However, on the left and right sides of the sheet some paper has been lost, for the lines of the scale bar have been cut off before the 1 and after the 10. The trimming on the right side must have happened before Dance wrote his initials, as they are in a similar position, in relation to the edge, as those on almost all the other drawings where they appear in the bottom right-hand corner. The later number (50) added above the Gd, rather than to the right is further confirmation that Dance wrote his initials close to what was then the edge of the sheet. On this evidence we can date the earliest trimming of the sheets before Dance’s ownership of the drawings (unless he himself was responsible for the trimming, and subsequently added his collector’s mark).

Digitisation of the Drawings Collection has been made possible through the generosity of the Leon Levy Foundation.

If you have any further information about this object, please contact: drawings@soane.org.uk