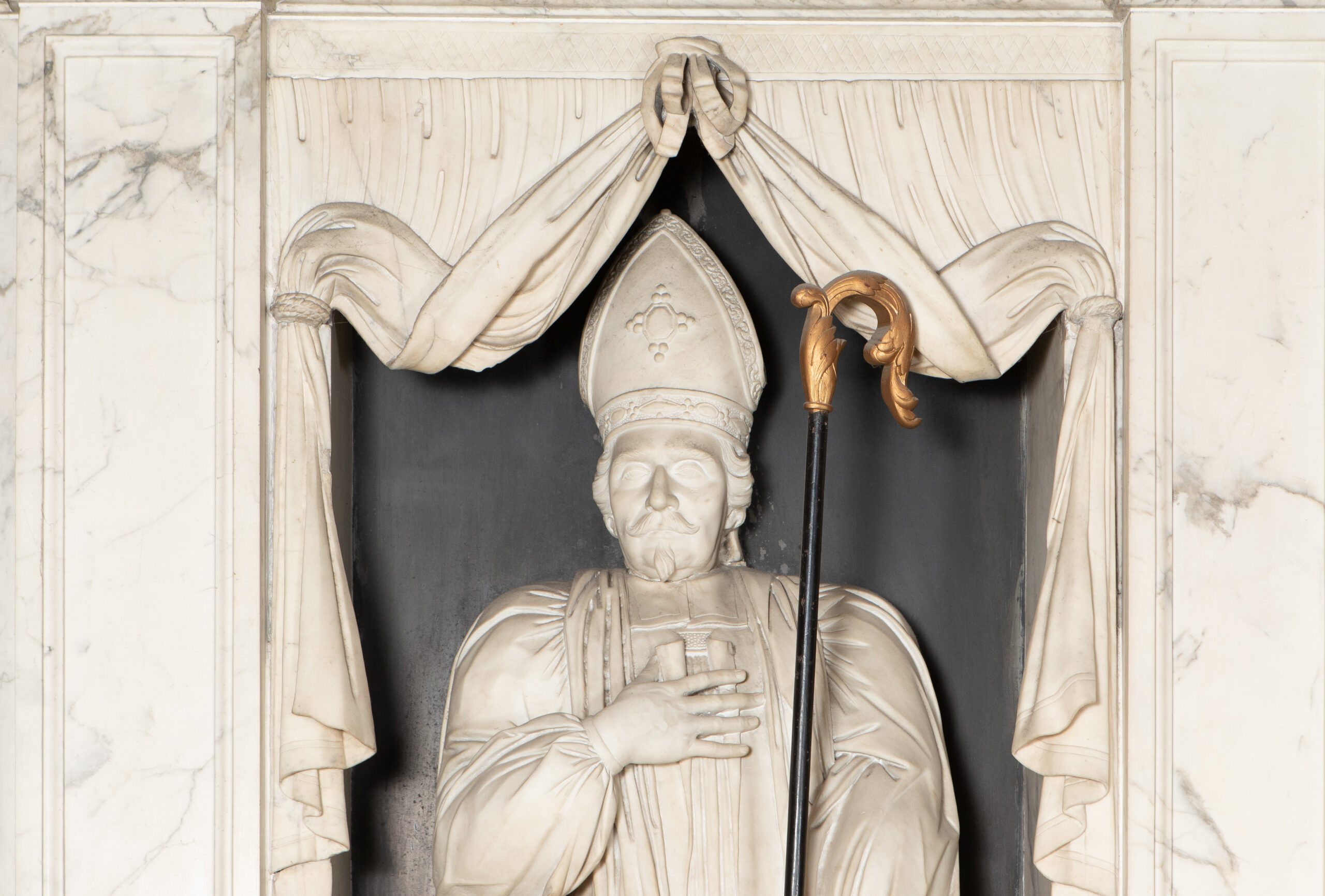 Altar tomb consisting of a sarcophagus base with inscription laid out in shape of oval and aedicular superstructure housing standing effigy of the Archbishop beneath draped curtains, with weeping putti holding torches flanking episcopal arms in semi-circular pediment made of wood.  The shield, framed by palm leaves and surmounted by a mitre, has arms of SEE of YORK (Modern) impaling LAMPLUGH.  The representation of the Archbishop, wearing a mitre and holding a crozier in the left hand, has its right forearm slightly raised with the palm of the right hand turned towards the chest. The archbishop’s son, also Thomas, paid £100 to Grinling Gibbons for the monument. It was restored in 1994/5 at the cost of the Friends of York Minster.

The monument is the first standing statue in the Minster and is said to be the earliest representation of a fully standing figure. Notably, the effigy of the Archbishop has two right feet.

Thomas Lamplugh, who died 5 May 1691, aged 76, was the son of Christopher Lamplugh of Thwing, Yorkshire and Anne, daughter and coheiress of Thomas Roper of Octon. He married Catherine, daughter of Edward Davenant, Rector of Gillingham, Dorset, and Treasurer of Salisbury Cathedral and grand-daughter of John Davenant, Bishop of Salisbury.  She died in 1671, aged 49.   They had one surviving child, a son, Thomas Lamplugh, DD, born in 1661.  Their grandson, the Revd. Thomas Lamplugh, Rector of Bolton Percy, has a monument in the next bay to the east.  He had been forced to resign his post as a fellow of Queen’s College Oxford in 1648, but continued to help Bishop Skinner with his ordinations, and after the Restoration, was active in removing dissenters from the university. In 1676 he became Bishop of Exeter.  He had James II’s Declaration of Indulgence read throughout his diocese, and at the landing of the Prince of Orange in 1688 went to London to pledge his support to the king, being rewarded with the Archbishopric of York.  He then swore allegiance to the Prince of Orange as William III, and assisted at his coronation.  He was an energetic Archbishop, spending much on improvements to the fittings of the Minster. He died at Bishopthorpe on 5 May 1691.

Here, in hope of resurrection, lies buried what was mortal of the Most Reverend Father in Christ Thomas Lamplugh, Professor of Theology [D.D.], descended from the ancient and noble family of the Lamplughs of Lamplugh in the County of Cumberland, who was student and fellow of Queen’s College, Oxford, where he studied the humanities and theology, and was Principal of St Alban’s Hall in the same University He was consecrated vicar of the church of St Martin near Westminster (St Martin-in-the-Fields),dean of Rochester, and in the year 1676 Bishop of Exeter.  At length though he had solicitously declined that dignity he was promoted to this metropolitical see in the month of November 1688.  The innocence of his life, the probity of his manners, his diligence in preaching the word of God, his love to his country, and his zeal for the Church of England, distinguished and adorned his character in every period of his life, and in every dignity which he rose, and have ranked him among those who shall be held in everlasting remembrance.  He fell asleep in the Lord, 5th Mary 1691, in the 76th year of his age.  He had to wife Catherine, daughter of Edward Davenant, Professor of Theology, and grand-daughter of John Davenant, Bishop of Salisbury, by whom he had five children.  Thomas, the only surviving child, had this monument erected to his father. 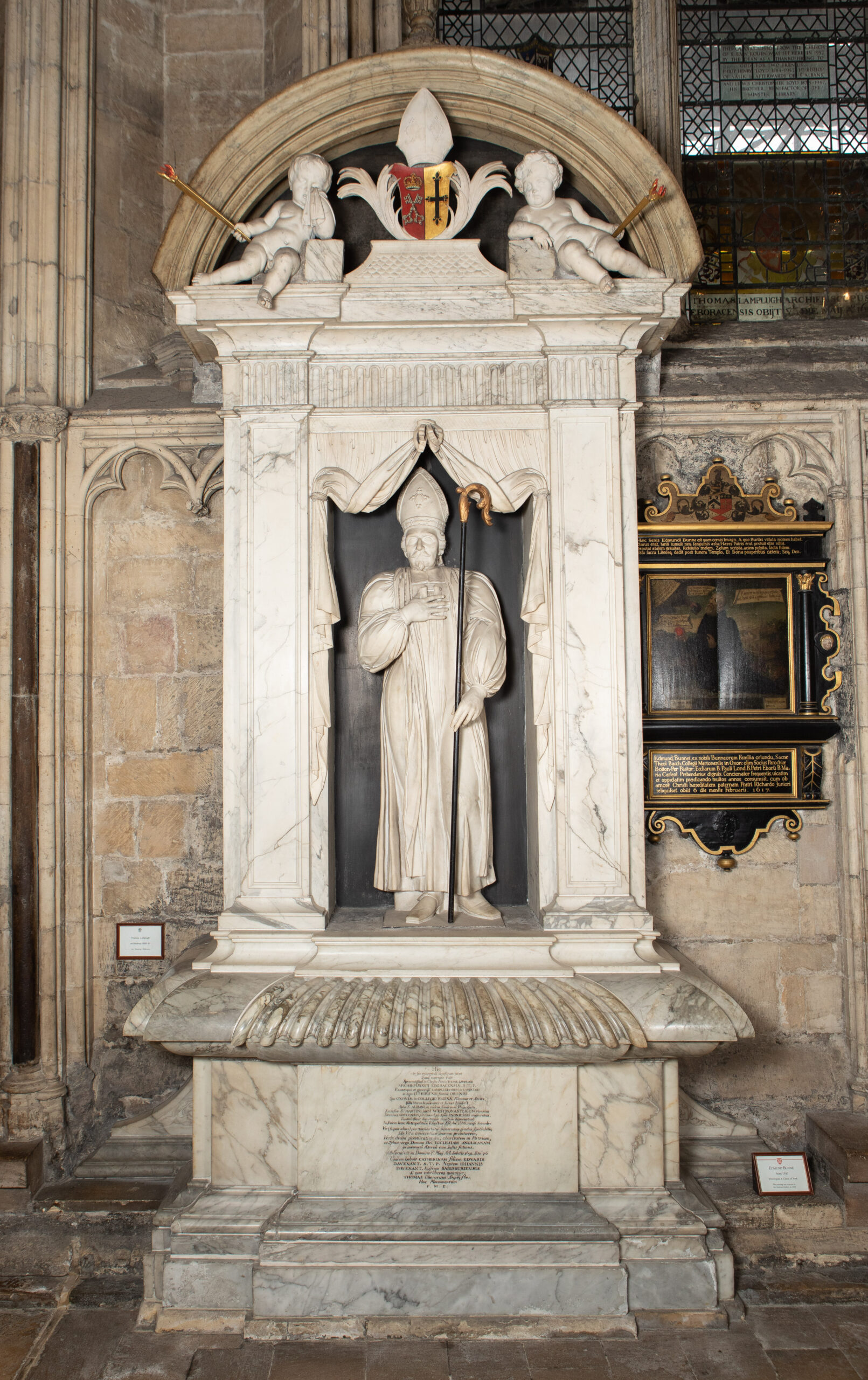 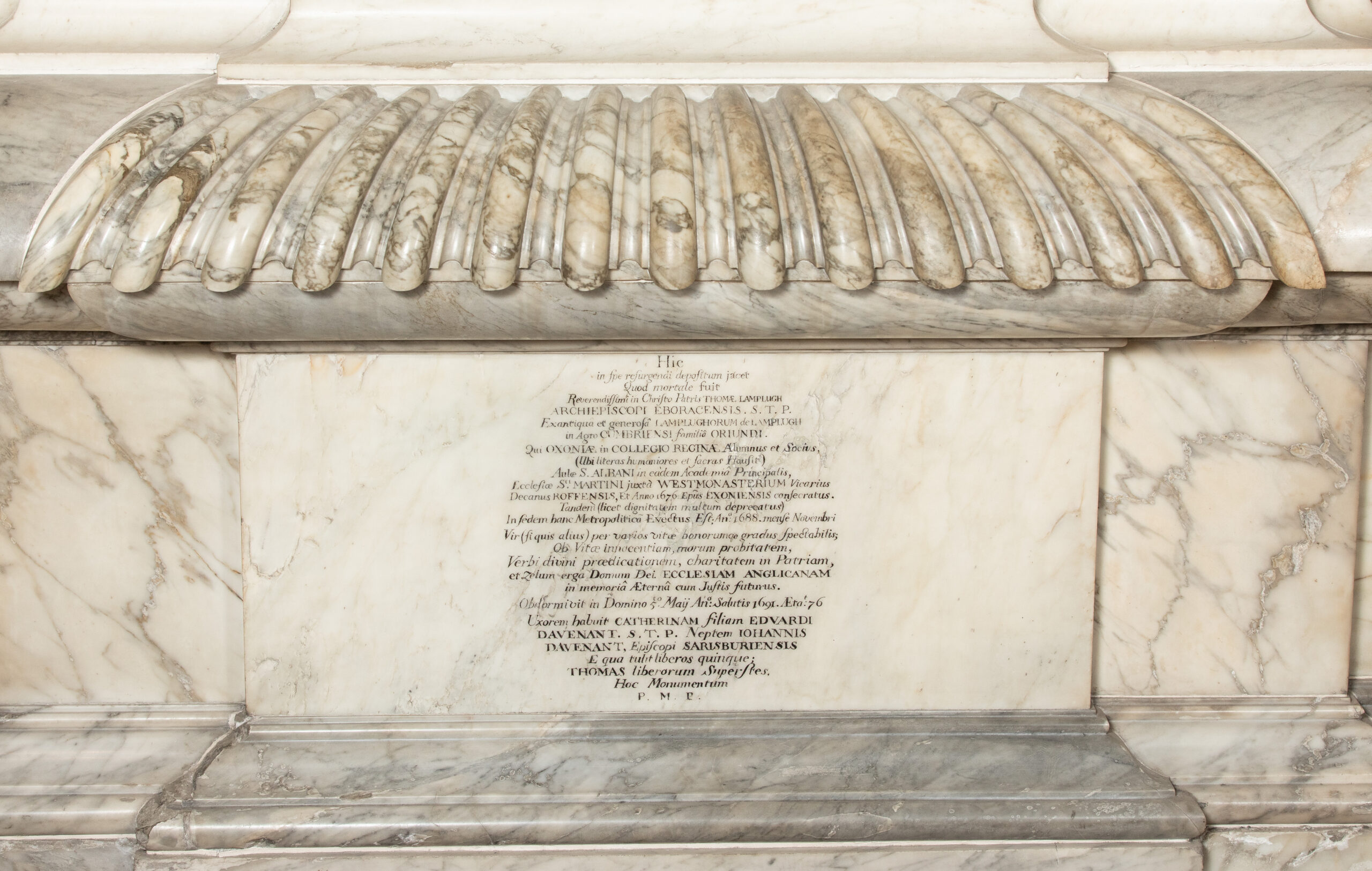 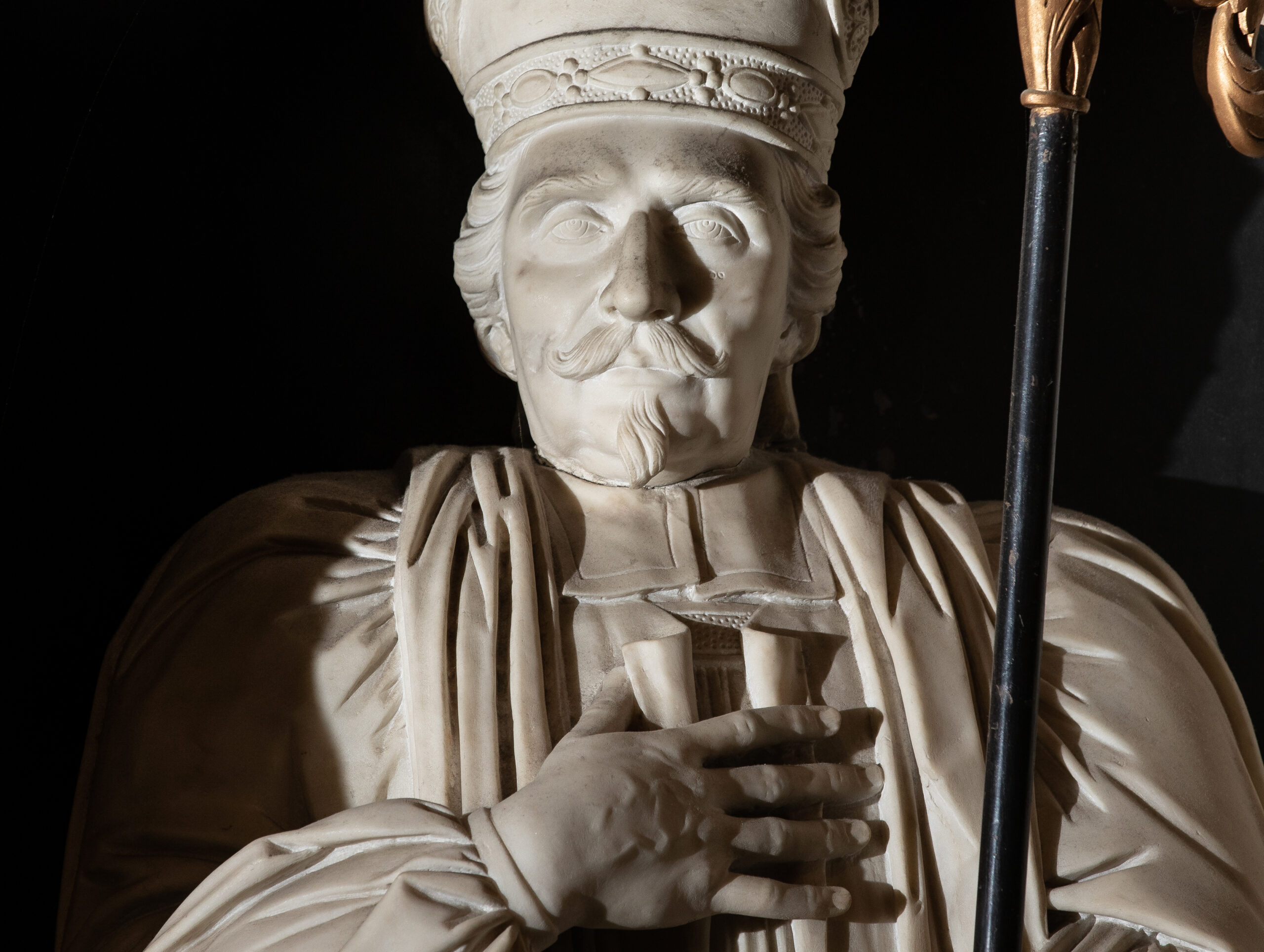 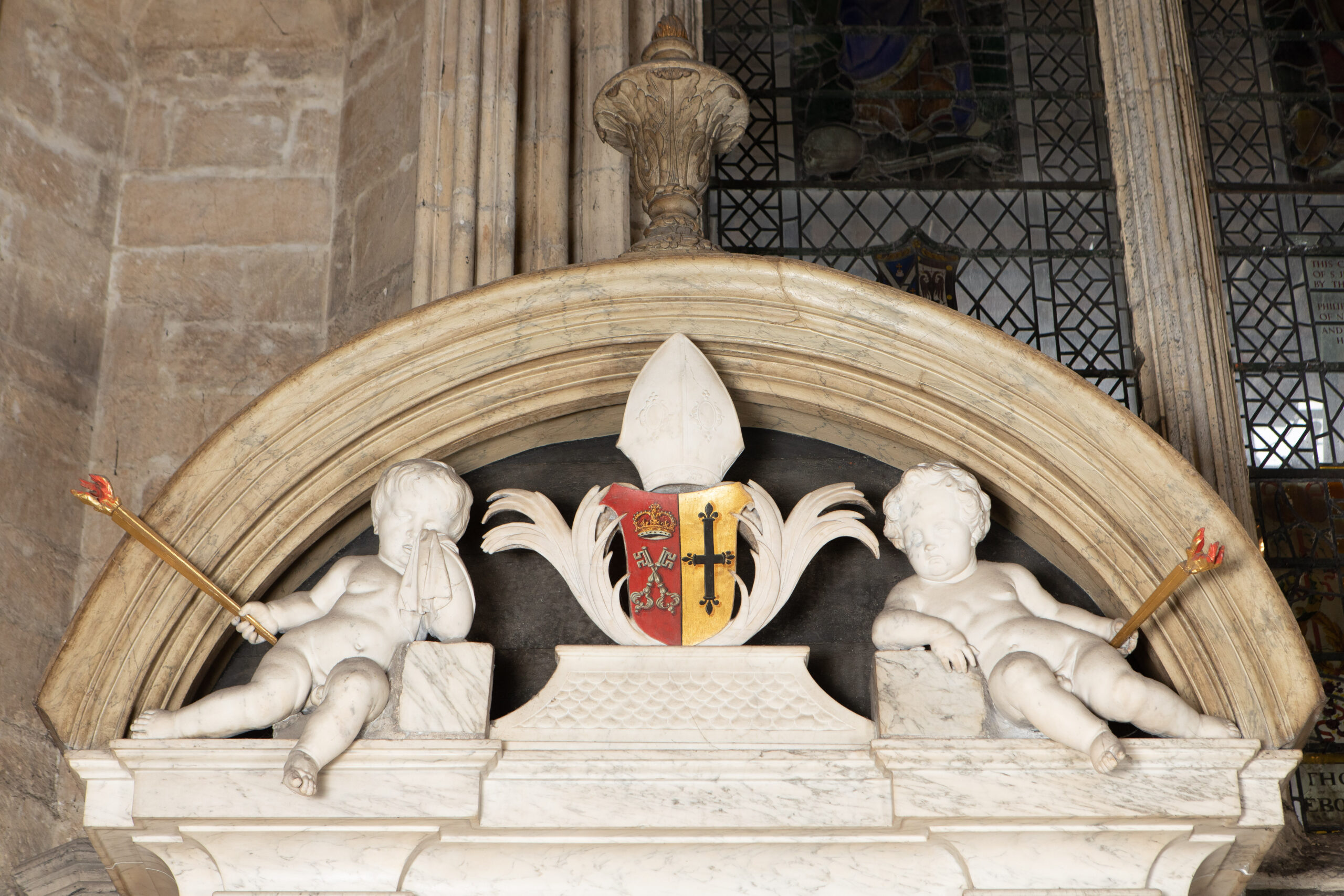 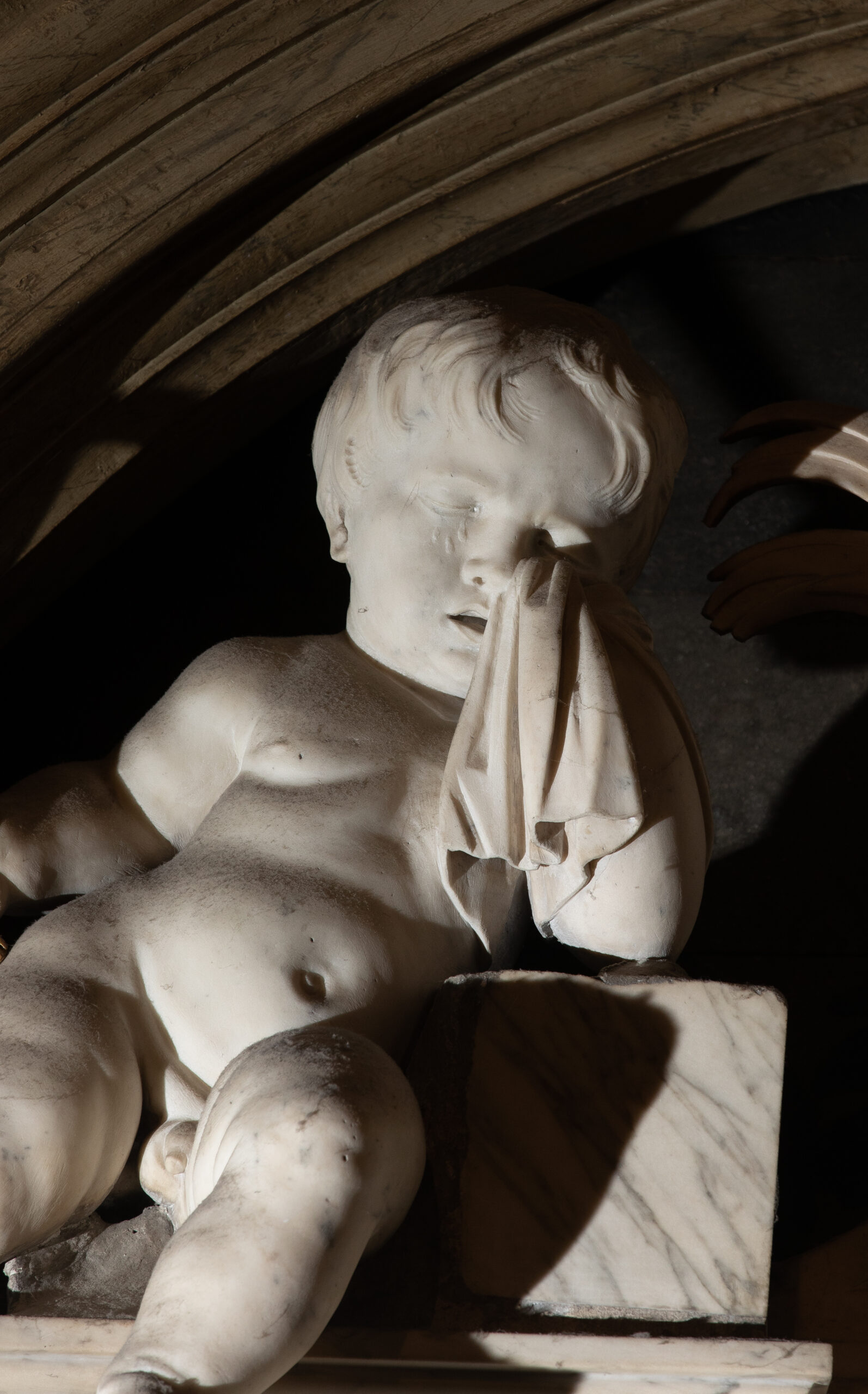 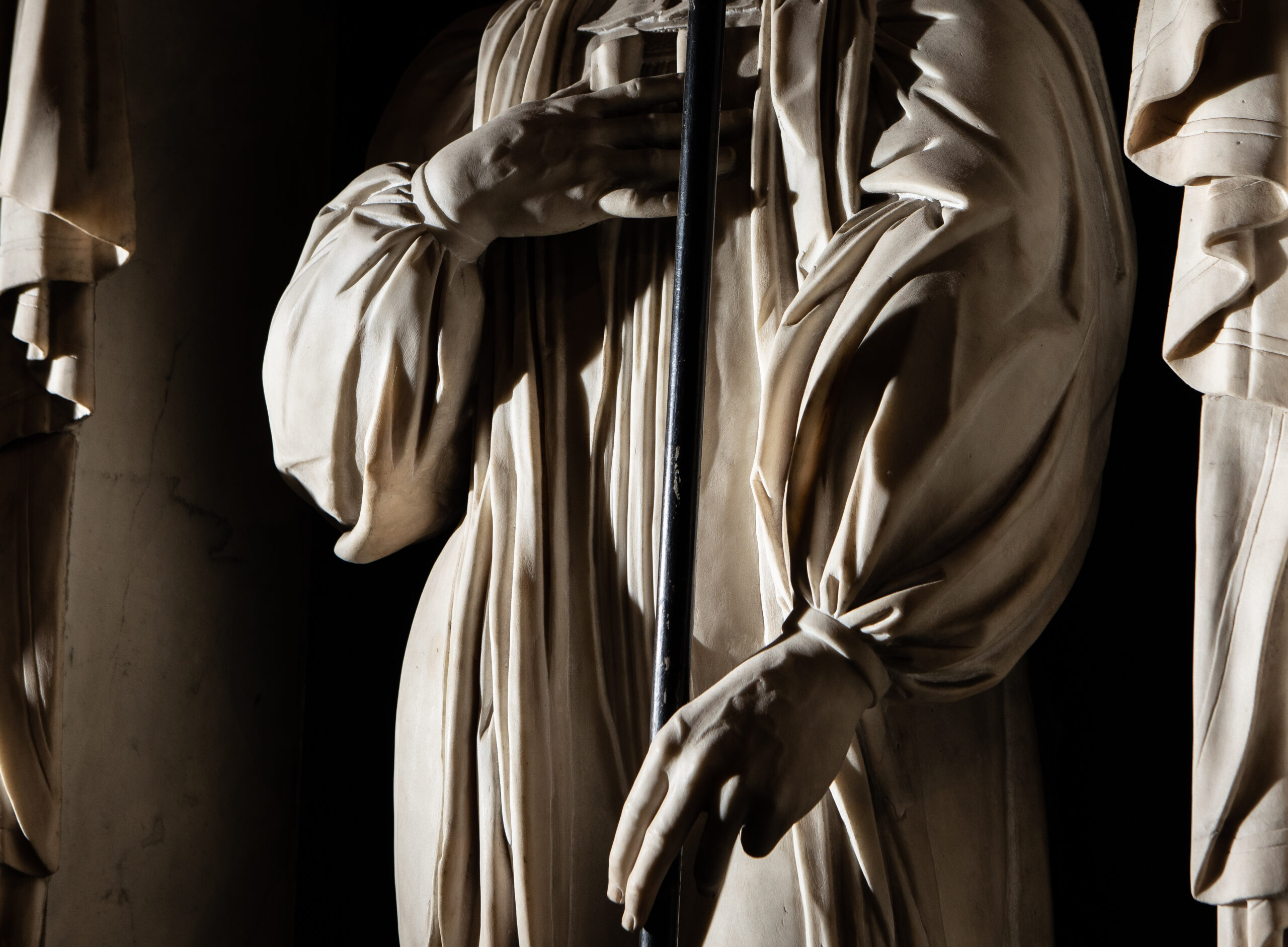