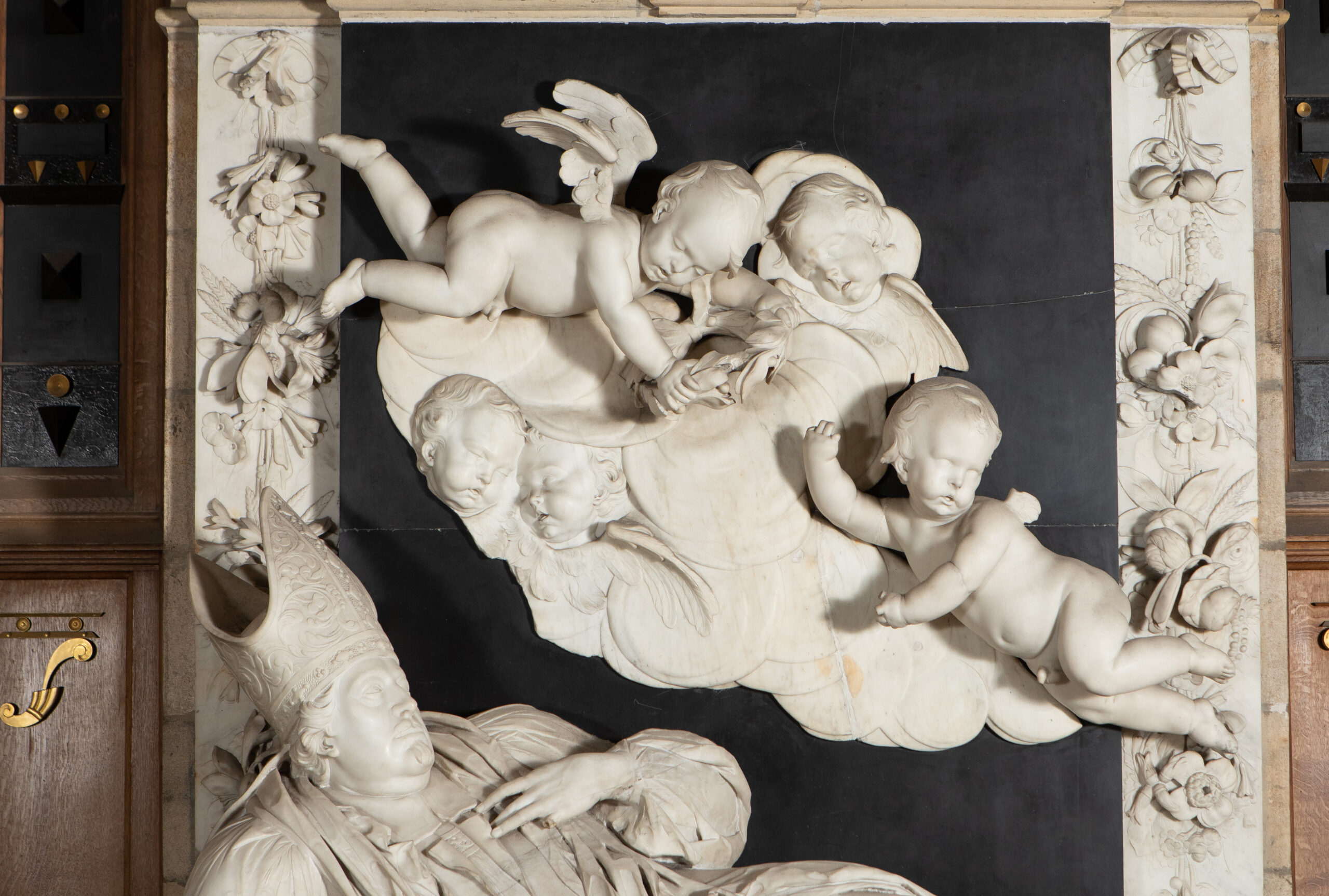 The monument is an altar tomb, with an inscription panel on the podium.  An astylar architectural framework has recessed pilasters enriched with fruit and foliage drops.  A pyramidal superstructure contains the shield of arms, SEE of YORK impaling DOLBEN, framed by winged cherubs’ heads, the whole surmounted by a flaming urn. The semi-recumbent effigy of the Archbishop is propped on an elbow with his hand resting on cushion while with the other hand he points to his breast.  He stares raptly at glory of winged cherubs, one of which offers him a wreath.

A contract between Gibbons and Katherine Dolben, the archbishop’s widow, was discovered bound into a copy of Eboracum by Francis Drake in the library at Longleat.  It reveals that Gibbons undertook to supply the monument, by February 1688, for £300, and provides details of the proposed design.

The monument was damaged in a major fire at York Minster in 1829.  Although stated to be nearly complete, the background superstructure was removed leaving just the effigy on its podium.  It was restored in 1951, under Dean Milner-White.  During the work, the sign of Grinling Gibbons, a pea-pod, was discovered in the swags.  While most of the original structure was found, the original marble cornice had been lost and was reproduced in Park Nook stone, while a new urn for the top was designed by David Green.  A further restoration in 1993-4 was funded by the Friends of York Minster.

John Dolben (1625-1688) became Archbishop of York in 1683.  He was ordained in 1656, and was appointed in turn Archdeacon of London, Dean of Westminster and Bishop of Rochester, and became the king’s Lord High Almoner.  He had fought in the Civil War on the Royalist side, and was wounded at the Battle of Marston Moor.  He died of smallpox at Bishopthorpe in 1688.  He bequeathed his chapter plate to the York Minster’s high altar and 376 books to York Minster Library.

INSCRIPTION (translated from the Latin)

Here is buried John, son of William Dolben, Professor of Theology [D.D.], descended from an ancient family in North Wales, born in Stanwick [Raunds parish] in Northamptonshire on 20 March 1624.  In the twelfth year of his age he entered the Royal School of Westminster with the most promising capacities and disposition.  He emerged from it in his fifteenth year, full of the peculiar genius of that seminary, being chosen into the number of scholars of Christ Church, Oxford. In the Civil War he took part with the Royalists, and bore the standard at the Battle of Marston.  In the defence of York he was dangerously wounded, and then consecrated with his blood in the place where he was afterwards to die.  In 1656 he received Orders from the Bishop of Chichester; at the Restoration he was made a Canon of Christ Church, then Dean of Westminster, soon after Clerk of the Closet to his Excellent Majesty Charles II; then Bishop of Rochester; after an interval of nine years, Almoner to the King; and at last, in the year 1683, he was advanced to the metropolitical see of York.  He administered the affairs of this province with great diligence and magnanimity, exhibiting an example to be imitated both by his clergy and their people.  In less than one year and eight months, worn out by the labours of this life, and ripe for the enjoyments of a better, having been confined to bed four days by the smallpox, attended with a lethargy, in the year of our Lord 1686, and the 62nd of his own age, the second of the most mighty Prince James II, on the Lord’s Day (the very day on which, in the preceding year, he had appointed the Lord’s Supper to be celebrated weekly in his cathedral church), he took possession of his heavenly inheritance.  His most sorrowing wife, grand-daughter of the great Gilbert, Archbishop of Canterbury, by whom he had three children, Gilbert, Catherine and John, erected this monument to her greatly missed husband, who can never be forgotten at Christ Church, which was built in part under his direction; nor at the Palace of Bromley, which was repaired by him; nor at Westminster Abbey, which he upheld with the greatest care: who for his eloquence in the senate and in the church, and his diligence in the duties of the diocese where he presided, will live for ever in the esteem and veneration of all good men. 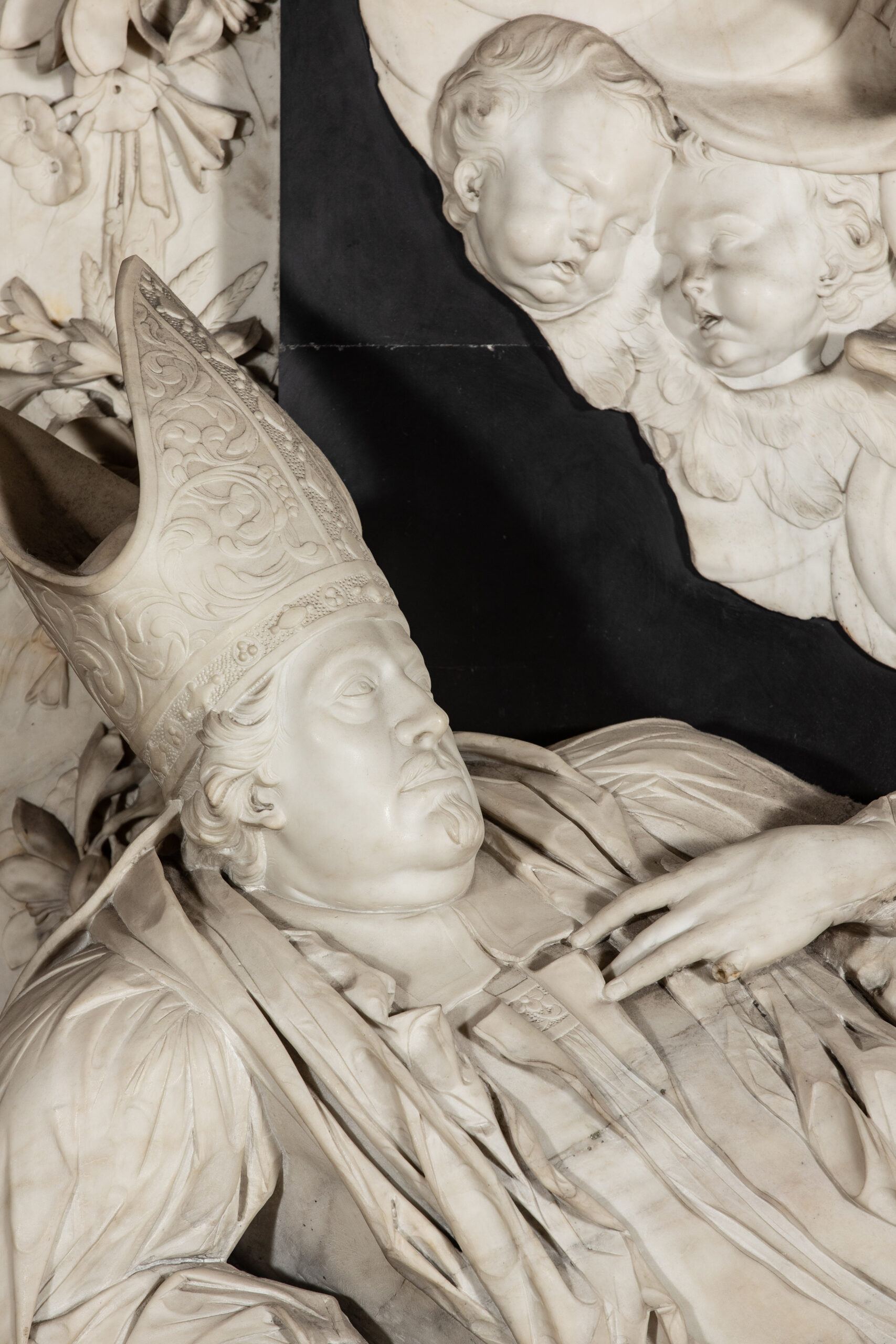 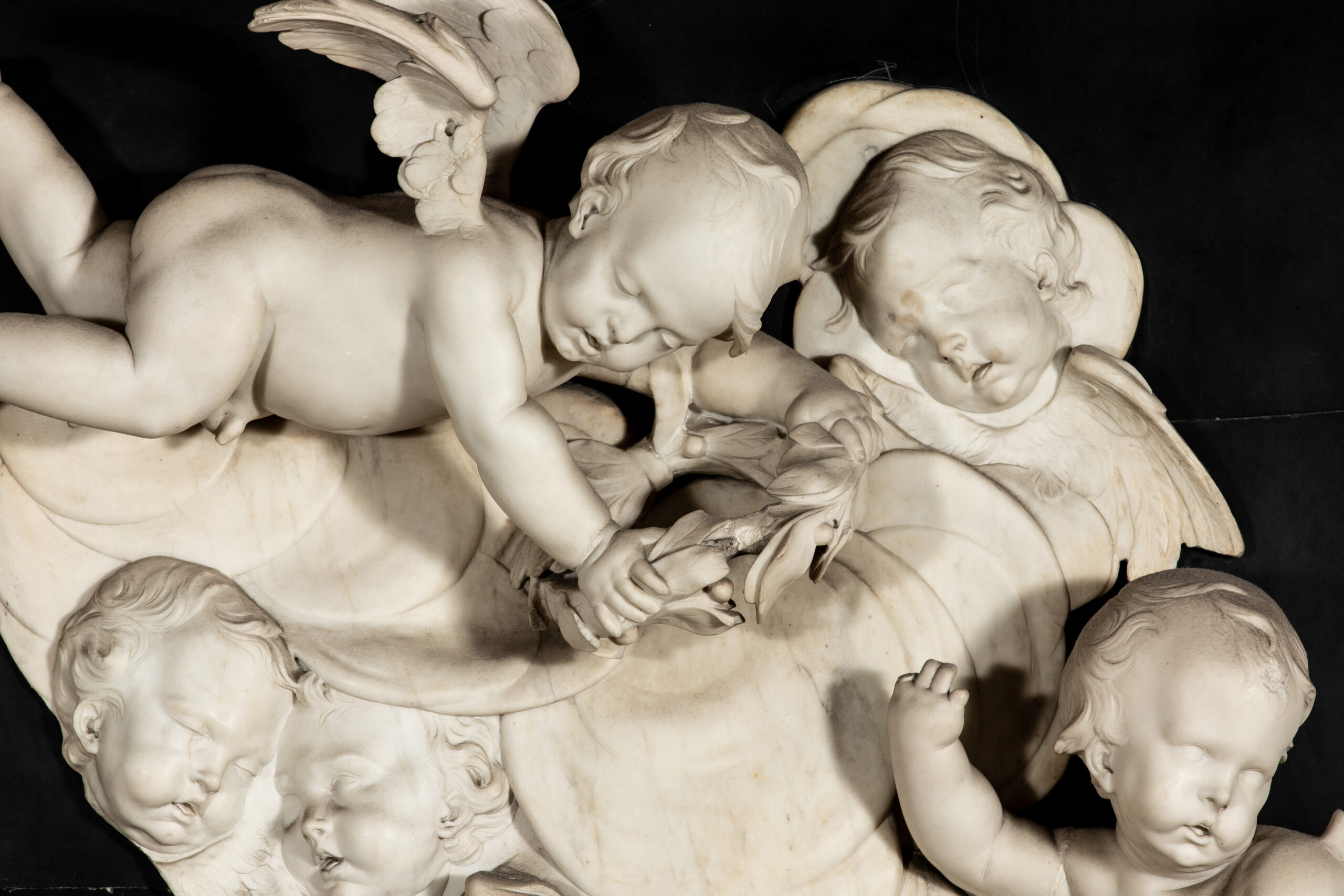 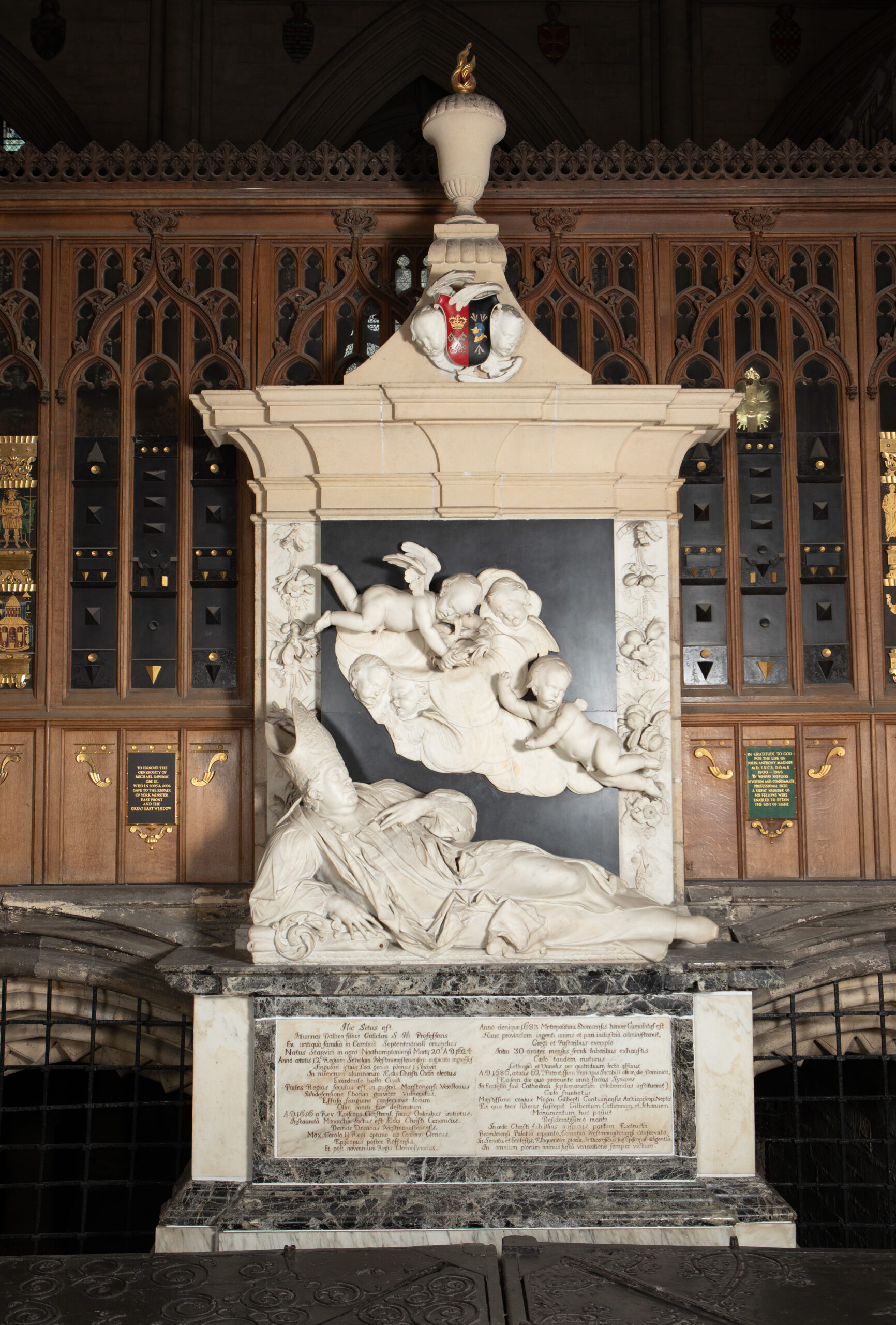 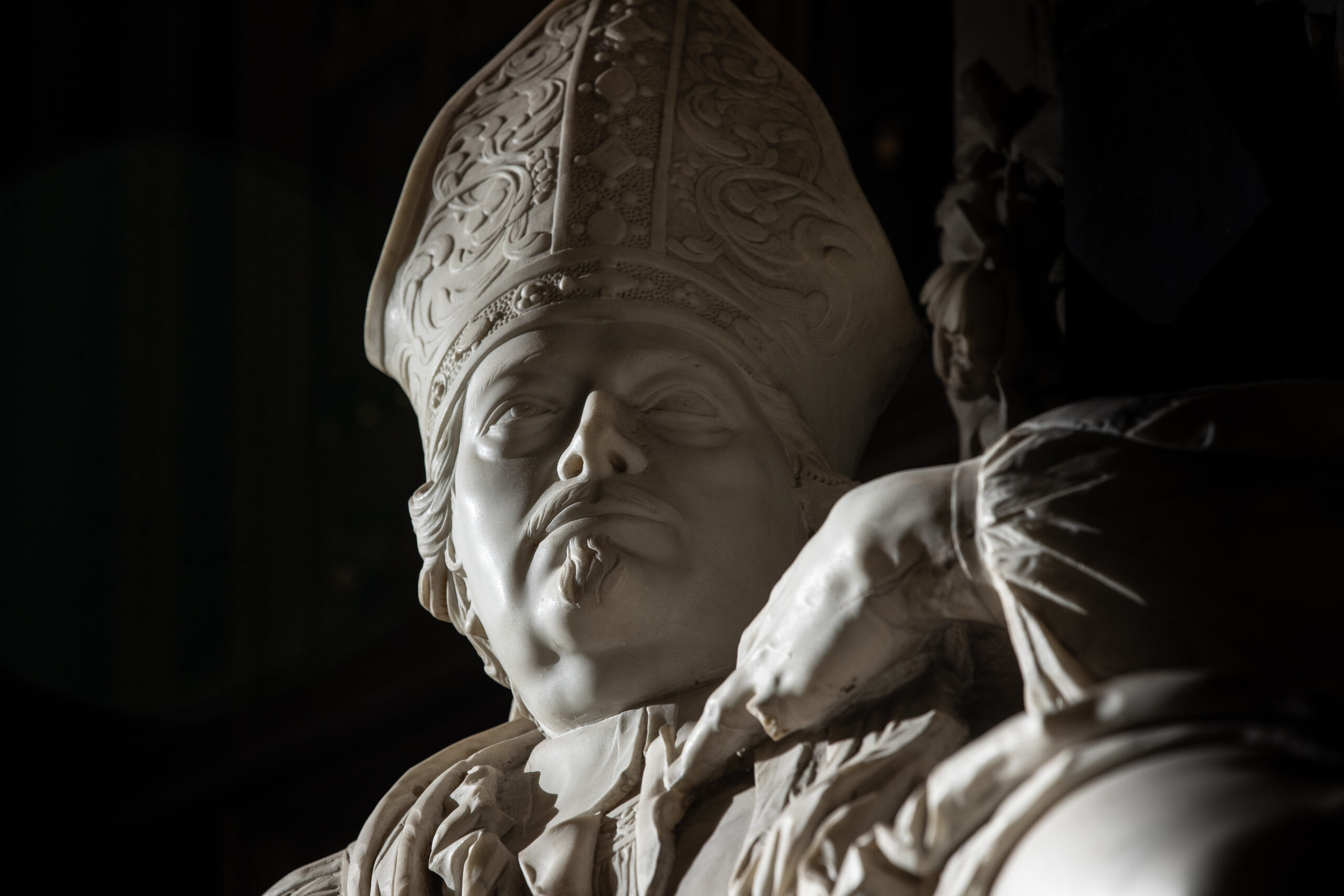 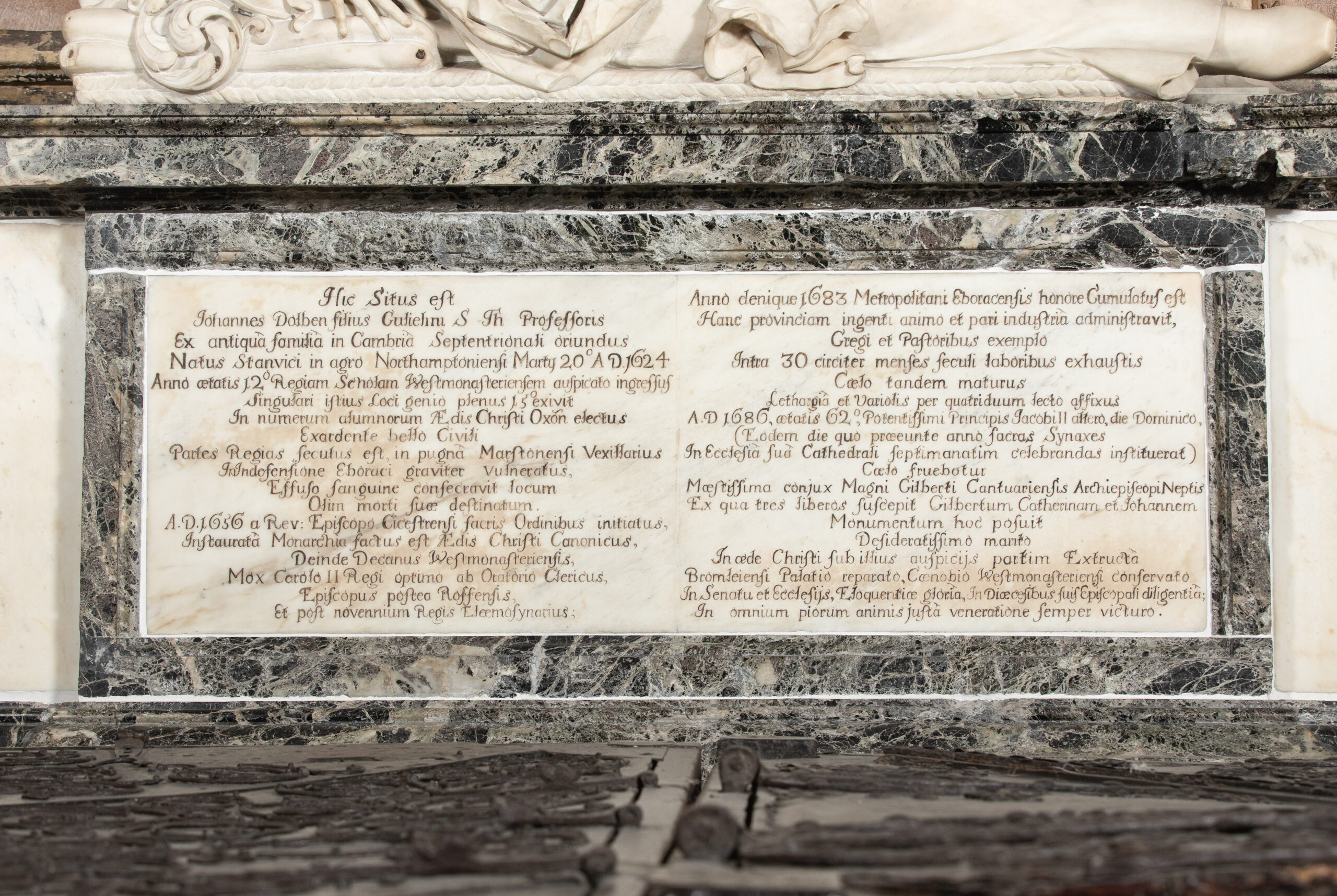 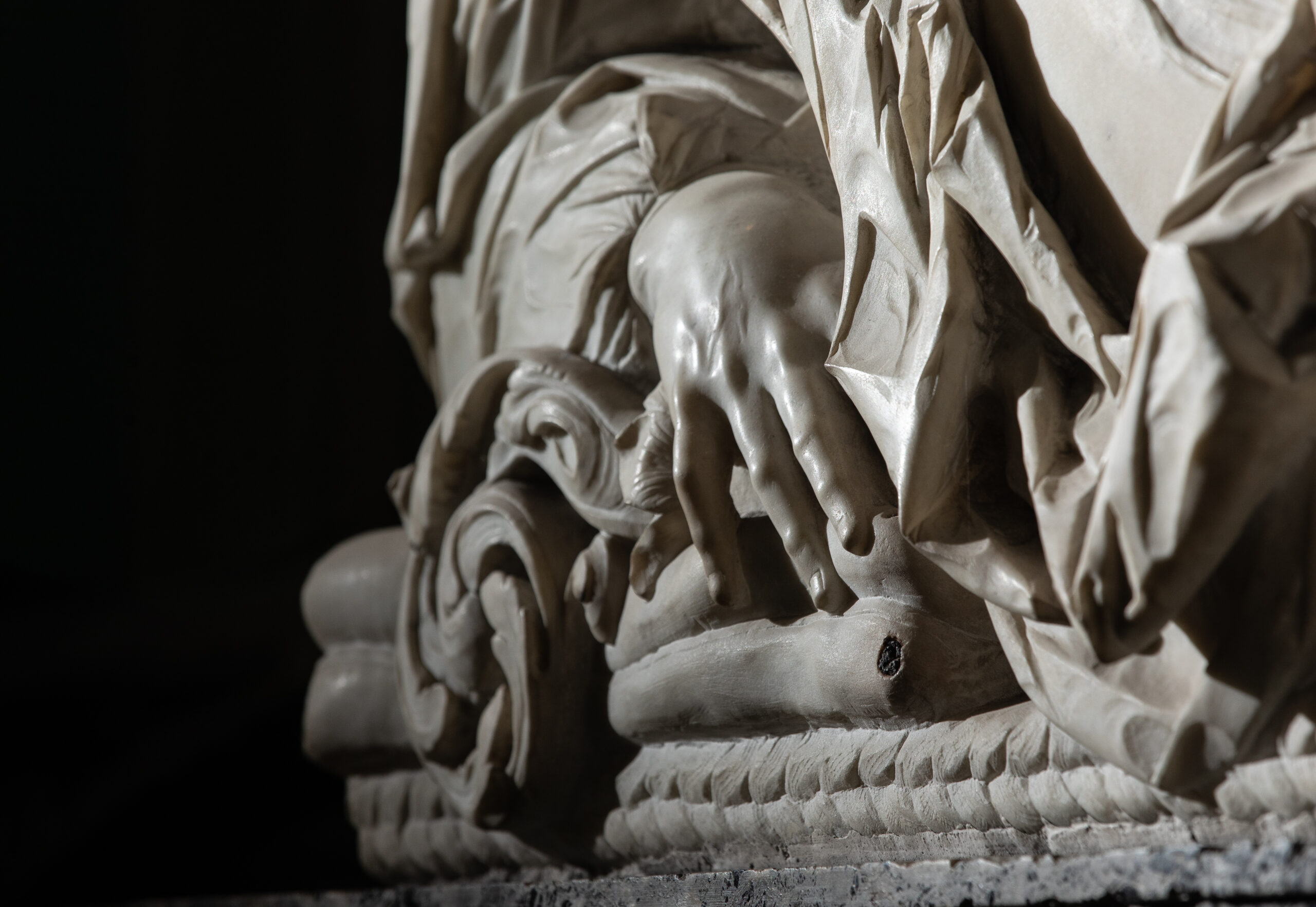