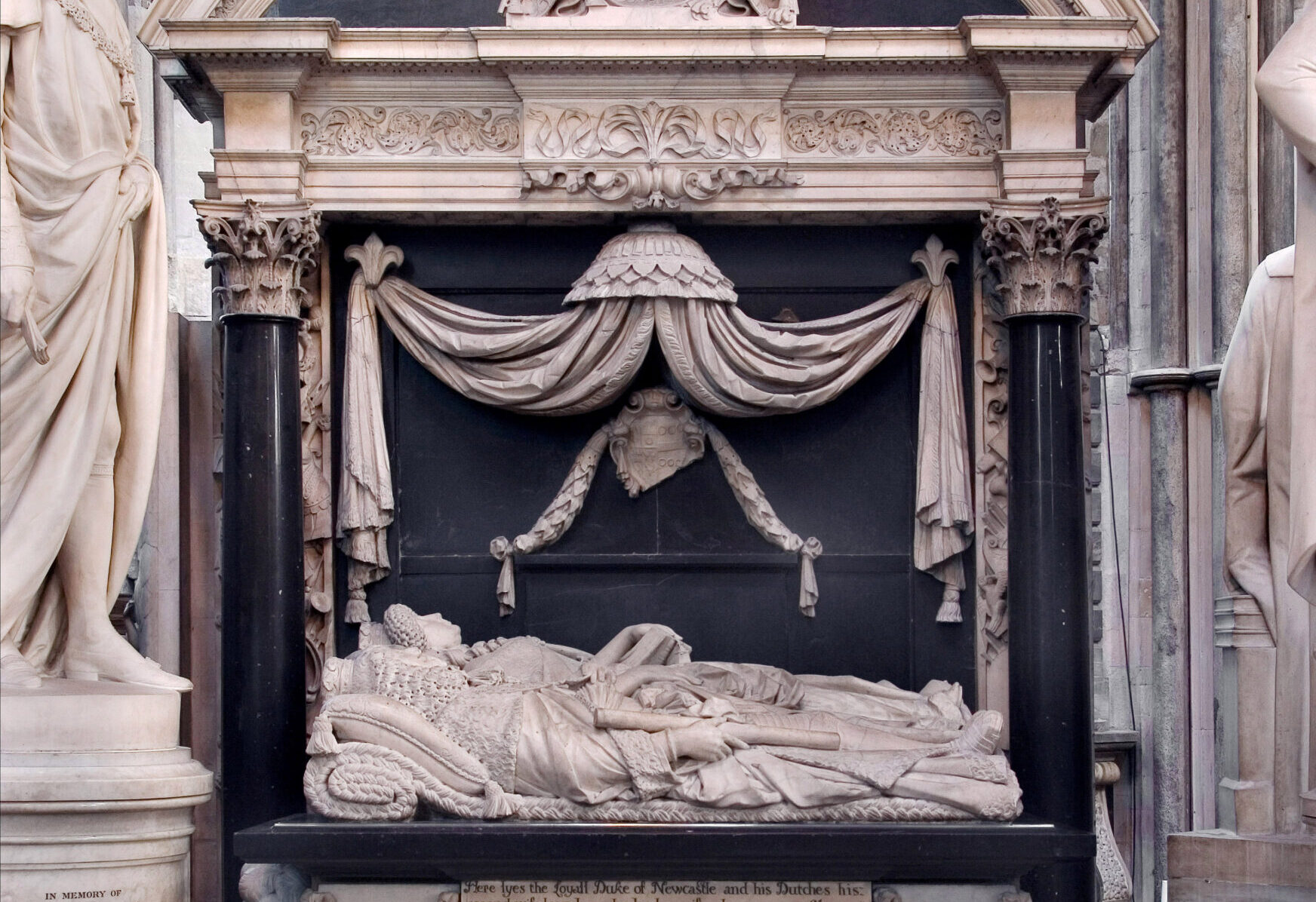 In the north transept of Westminster Abbey is a black and white marble monument to William Cavendish (1593-1676) , 1st Duke of Newcastle and his wife Margaret (1623?-1673). This was erected in his lifetime and is by sculptor Grinling Gibbons.

Atop a sarcophagus, the recumbent effigies depict the Duke in his robes and coronet lying on a rush mattress wearing the chain of the Order of the Garter and holding a baton and the Duchess holding an open book, a pen-case and ink horn, in reference to her prolific literary output. There is an heraldic achievement at the top, with a lion and a bull for supporters and a snake for a crest. The coats of arms are: “three bucks heads caboshed” (for Cavendish) quartering “a fess between three crescents” (for Ogle).

The lower section is an altar tomb with cartouches at each end and an inscription panel flanked by Roman armour and military trophies, with a further shield of the above arms and one of the Lucas arms: “a fess between six annulets” [rings]. On the south end of the tomb base are carved seven large books. An architectural background consists of a tented canopy flanked by columns which support an entablature and a pediment with heraldic achievement.

The inscription to the Duchess on the base, most probably written by the Duke, is in English:

Here lyes the Loyall Duke of Newcastle and his Dutches his second wife, by whome hee had noe issue, her name was Margarett Lucas yongest sister to the Lord Lucas of Colchester a noble familie for all the Brothers were Valiant and all the Sisters virtuous. This Dutches was a wise wittie & learned Lady, which her many Bookes do well testifie. She was a most Virtuous & a Loveing & carefull wife & was with her Lord all the time of banishment & miseries & when he came home never parted from him in his solitary retirements.

William’s inscription is in Latin and was added after the Duke’s death by Sir William Dugdale. This can be translated:

Here lies that renowned hero, William Cavendish, Knight of the Bath, and Baron Ogle, in right of his mother, Viscount Mansfield, and Baron Cavendish of Bolsover, Earl of Ogle, Earl, Marquess and Duke of Newcastle upon Tyne, Lord Lieutenant of the Counties of Nottingham and Northumberland, first Lord of the Bedchamber to the King, Guardian to Prince Charles, Privy Counsellor to the King, and Knight of the most Noble Order of the Garter. A nobleman, who showing abundant fidelity and courage to the King’s Majesty, at the beginning of the Grand Rebellion, was deservedly made Captain General of the Forces raised in the north of the Kingdom. In several battles (which he soon won) and in defending the City of York against the Scots, he gave proofs in all respects of his integrity and unshaken courage; for which reason, when the Rebellion grew strong (being one of the first destined for death), he left his home, and with great resolution endured a long exile. He first married Elizabeth, only daughter and heir of William Bassett of Blore in the County of Stafford, Esquire; who bore him sons, Charles who died without issue, and Henry, heir of the Honours; Daughters Jane, married to Charles Cheney of Chesham-Bois; Elizabeth to John Earl of Bridgwater, and Frances to Oliver Earl of Bolingbroke. He died the 25th of December in the year of Redemption 1676, and of his age the 84th. 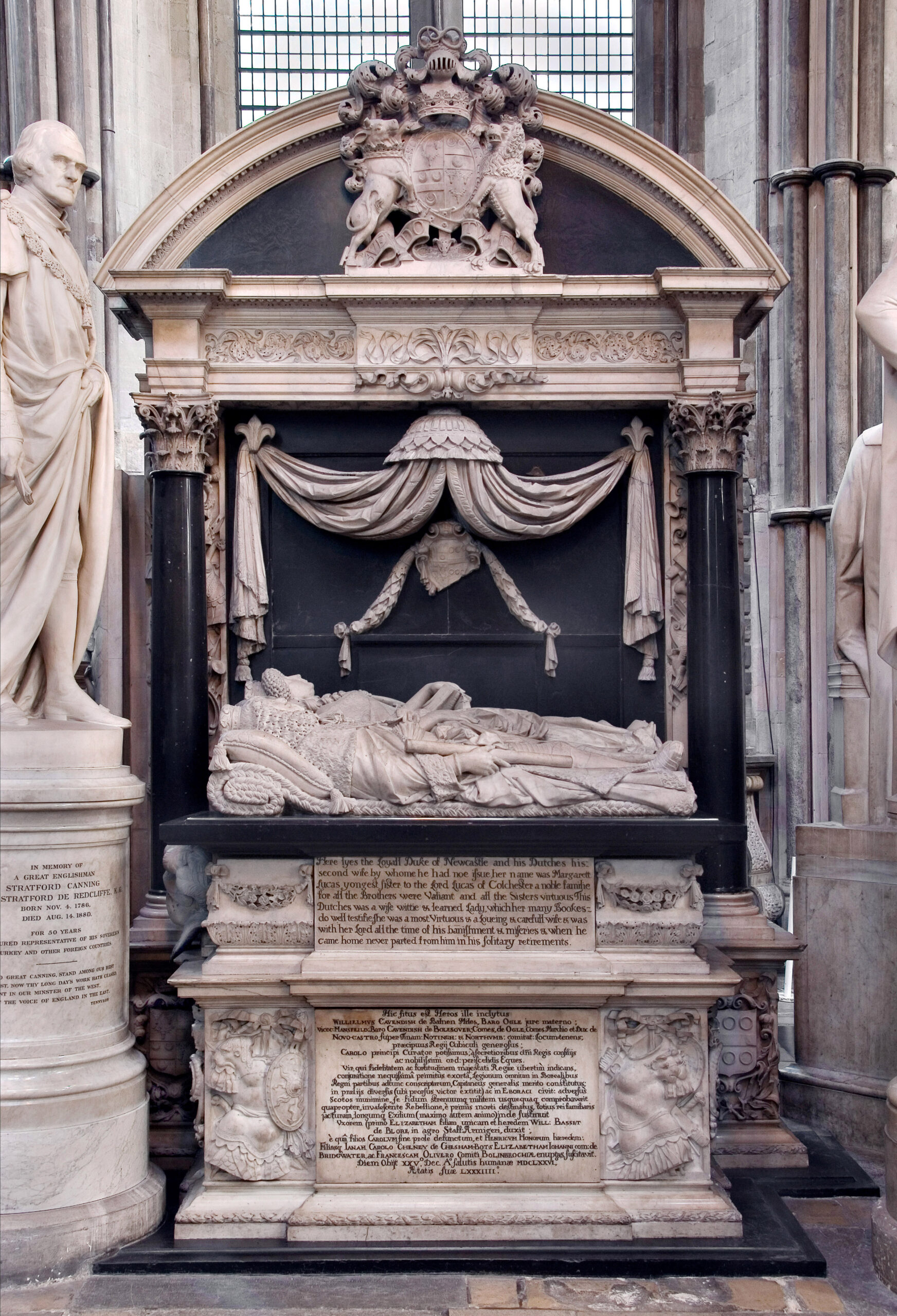